Thrity years ago a legend died. A man that I doubt even fully understood his influence and power over the rest of the world. That fact he never fell for his own hype is why he is immortal. It shocks me that not everyone knows his music.


‎"Oh, you know Bob Marley. He wrote Super Freak." Said the Kankle-bearing whore at Wal-Mart in front of me in line. I almost said something, then I remembered to chill, because that's the way Marley would of wanted it. So in his memory, I just chilled and enjoyed some Fun Dip.
No comments: 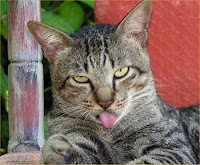 It's a shame they had to kill Bin Laden. His court case would of made the O.J. Trail look like Dawson's Creek. Death is the ultimate tragedy/comedy. The fact we can feel both emotions makes us evolved humans or house cats. We're about the only two species that kill for reasons other than food.

With that said, Binny had it coming. According to him, he was saving his people ,in the name of religion, by fighting western influences. Knowledge always gets in the way of religion. Every celestial pursuit must ignore or kill the people begging for true self-enlightenment.

The thinkers have to be silenced in order to preserve one man's vision, to hell with these "men." Don't think for one moment I'm only referring to the Arab culture. Teachers of hate are international and you know at least one personally.

I guess I'm cool with all the revenge. I am a house cat/human after all. A slow smothering would of been more just, but a NATO approved bullet to the dome got the job done. The last seconds of his life he used women and children to shield him from the bullets during the siege. Stripped of his pious character we are left with a coward in any culture.

The only thing that makes me sick are the people in the street celebrating his death. The videos of hate filled mobs have an inverse effect across the respective ponds. They see us as savages, just as we see them as archaic and devolved. Of course, us Americans prefer to have a buzz-on when we celebrate. So I guess it's totally different.

Either way, I anxiously await the next person to take Bin Laden's place. I'm sure our government is already conducting interviews. Along with Bin Laden, we also helped Saddam Hussein and Muammar Gaddafi get their jobs. Perhaps a background check would help next time. Maybe we can put a post on CareerBuilder.com.
1 comment: