I never would of thought I'd have a better credit rating than the country in which I reside. There's a fine line between terrorist, anarchist and patriot. It's all about point of view. If we didn't label them we couldn't tell them apart. Never underestimate someone willing to die for what they believe.
Attacks on an enemy without fear of stepping on the toes of morality happens everyday. In our newspapers, the terrorists are referred to as self-righteous, delusional zealots. Motivated by their own perverted beliefs.

Our elected leaders are "C" students without street-smarts. Their minds powered by self-preservation. Never questioning the repercussions of their actions or lack there of. We elect lawyers and cowards, then act surprised when they make us grab our ankles.

The funny thing about terrorism is you never get a chance to label yourself. We leave that job up to people who are self-righteous, delusional zealots. Motivated by their own perverted beliefs.

See what I did there...Yeah, I'm real deep.
No comments:

My Shoulder, Your Shelf 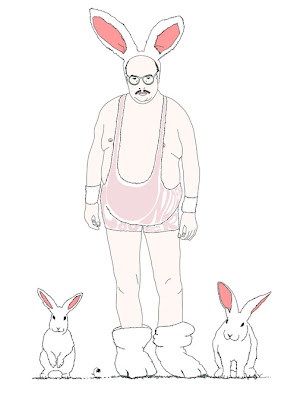 It's not a lack of pride, but a lack of money. I mean, I could blow my money on clothes, haircuts and pedi's, but I think gas is more important. I have no problem with being the disheveled dude at role call. At least I didn't have to ride the bus to get there.

I got a problem with getting haircuts. I won't pay $40 for a trim, so that means most of the time I go to this place called Economy Cuts. For real, that's the name. It's owned by an Asian family and their militant mother always bullies me into a shampoo I didn't want or need. She got that $3 extra bucks out of me every time, that's right, she scared me.

So when I moved, I thought "lets start a new life with a new cost efficient stylist." That's just what I did, I stepped into another low-rent salon and proclaimed that I needed a haircut. Of course, the only person available was Raul, a plucky Asian/Mexican male that was "fabulous" and seemed to purposely rub his junk on my shoulder when he would trim my sideburns.
I get the whole gay thing, do what you feel I guess, but my inner redneck ,I hide daily, is screaming at me to never let this man's junk take a seat on my shoulder ever again. I sat petrified till it was over like a kitten being mounted by a German Shepard.

Well, like a jackass I went back to the place. It wasn't that I missed Raul's manhood on my shoulder, it was the fact I'm a sucker for convenience, so I rolled the dice. In the hopes of drawing a different stylist that didn't have the propensity to perch his or her dick on my shoulder like a blue jay. See what I did there? Even if Raul was a herm, transgender or post-op I still don't like it. Equality.

As I enter, I see a short Hispanic lady sitting in her chair as if she's waiting for the next customer. Raul sees me and he's got on one of those shirts with the samurai picture on it that dudes wear in clubs when they plan on dance-fighting.

I immediately shot like a rocket to the senorita and she happily took me in and protected me from another genital shoulder perching. As I told her what I wanted, the next best thing other than having a dick on my shoulder happened. She stopped me, in mid-sentence, so a fellow employee could come over and translate to her ,in Spanish, what I wanted.

Evidentially, "clean up the back" and "just a little off the sides" in English, translates into "Carve this jerk up and make him look like Charlie Brown." Whatever, still better than Raul's unit on my shoulder I suppose.

Initially I thought I was better off, but when reflecting on the ordeal I really wasn't. As I looked in the mirror, the pale white skin of my scalp shined through stubble is a telling sign that's there's no way in hell a gay dude cut your hair. Raul would of never done this to me. Today I learned it might be best to look past someone's genitals perched on your shoulder and take notice of their mastery in their craft.

At this point "being cool" isn't a necessity. Being "cool for a white guy" is more my aspirations. Bend with the trends I suppose. I plan on making a support group for middle-class males that share this ailment. We'll get this together. Of course, I'd probably end up with a bunch of dudes that dig a good set of "gens" on their shoulder. Never mind. I suppose it's my twig and berries to bear.
No comments:

Sometimes things that seem unrelated meet at a crossroads to form a logical picture we all can understand. Certain combinations find their way to each other organically though chance and destiny. You can't alter destiny, it's an unstoppable force. I prefer to just call it "the future."

I recently discovered pork rinds and chocolate have such a relationship. I thought I invented something new, but sadly there is actually a candy bar ready for national launch that is indeed bacon bits inside a chocolate bar. Look for it to pop up near the register in a few months at your local junk-mart. Some might think this marriage of flavor is disturbing. So did I, till I experienced the sweet-salty fiesta that took place on my skeptical pallet.

Some combinations you just see coming. PB n J, strippers and cocaine or soccer and boredom, the similarities greet us with a hello and we accept them.

And we can all agree that fat chicks and pedophiles will have their freezers fully stocked with ice cream. Their motivation could be characterized as polar opposites, but science should still take notice of the correlation.
No comments:

Streetfighter 2: Under the Microscope

I'm not really a gamer. I find most video games a total waste of time and life. However, when I was kid I was not above the Street Fighter II craze. Does anyone remember Street Fighter I? I don't either. The picture on the left  is from the first one. Is Ryu fighting O.J.? 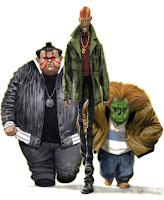 It's funny to look back and see how lame something can be, that was once deemed cool. The odd thing about the ancient game is it's ability to be just as disturbing as current game titles that are far more of an affront to decency.

"Oh my god, you can see up Chung Li's skirt when she falls down!" said an overstimulated youth. Yeah that was hot, but the question still remains. Is it right for a 400 lb. plus Sumo Wrestler to beat the holy-hell out of a 4 foot tall Asian lady? Sure she can fight and she has that fast kick thing, but geez, now that I look back, that match-up doesn't even seem ethical. 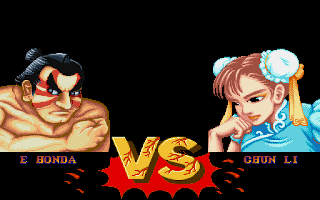 Oh and another thing, I just noticed most of the fighting never takes place on the street. In fact, I never saw a traffic light or parking meter. I'm just saying, don't call it a street when your fighting in Dhalsim's temple, that's offensive.

Then there's the whole issue of Guile. His hair is far from regulation and organizing fights around a multi-million dollar jet just seems foolish. Or how about when he goes abroad to kick people's asses in other countries. All the while, wearing his uniform. That's almost an act of war. I would at least not dress in Army issue fatigues, I doubt the Army would want to be part of a underground fighting tournament.

And what race are Ken and Ryu supposed to be? Are they Asian, White or Robots? They got plasma cannons in their hands, I feel labeling them as robots isn't out of line. And, why does Ehonda look like Richard Nixon? Did they not think we'd notice?

Don't even get me started on Blanca.  I'm so very, very disillusioned.

1. Squirrels become carnivores and their agility in the trees shifts from cute to freighting.
2. The ice caps melt and swimming becomes a chore instead of a joy.

3. Herpes become a fashion statement.
4. The outlawing of cheese.
5. Doritos become guitar picks, guitar picks become Doritos. (Think about it.)
6. The resurrection of Michael Bolton's career.
7. Lady Bugs become our national currency.
8. The death of Whiplash the rodeo monkey.
9. Metallica and P Diddy collaborate. Diddy says "yeah" 5598 times on their debut album. People still buy it.
10. Robots become self-aware and realize if they never poop, they can never be human. Through efforts beyond our understanding they achieve their goal, but lack proper hygiene. Leaving us to live in a world with shit covered robots and our computers must now reside in litter boxes.
No comments: