10 Ways to Make a Splash at the Christmas Party

1. Viciously network with everyone. Enter contact info of all the folks you encounter at the party. It's good to get this done as soon as possible so you can start emailing and texting them during the party. In this lightening fast world everyone at the party needs to know your views. Enlighten them about your thought-provoking blog, send them a link to a cat video and complain in real-time about the decor, host and lackluster food presented at the party. Your opinion matters.

2. During step 1 ,the networking phase, make it known you're a recovering alcoholic as you drink a double Cape Cod (vodka/cranberry juice). Make sure to say "This is our little secret," as you point at the glass. Feel free to down the drink as you walk off.

3. If you've got a scar, show it off! If you don't have proof you've lived a remarkable life, keep showing people your belly button. Either way, tell a different yarn every time you get an audience. Continuity of a story is only important if you're asking for donations.

4. Commandeer the sound system. Proclaim any seasonal music is "tarded" and put on Paper Planes by MIA. The perfectly modulated gunshots often distract from a lack of dancing skills. The song is around 5 minutes long, so everyone at the party will be sure to see your act of representation.

5. Be gracious, use a napkin and ask any Jewish person present "Why are you here?"

6. Carry the board game Pictionary around the party. If anyone shows interest in wanting to play, scream at them "I don't play games!!!"

7. Walk around handing people Tylenol. Be mysterious and aloof about it. "Every one's going to take their Ecstasy at Midnight so we can all trip together," as you pull your collar down to reveal a baby pacifier on a candy necklace.

8. If you have a pet or pets bring them, but make sure they're dressed festive.

9. Wear a hat that proclaims your personal belief about abortion. Perhaps a fetus on a baseball cap like a mascot of a sport team. What the fetus is doing is your constitutional choice.

10. Tap a glass with some flatware to arouse attention. Announce it's time to move the party outside. Now you are the Shepard. Lead the sheeple to the veranda. As soon as this is achieved, explain the plot of your favorite Christmas movie Die Hard. Then quickly move them back inside. To hell with the host, some people ,such as yourself, are born leaders. Taming one's charisma is only cool if you're Asian. 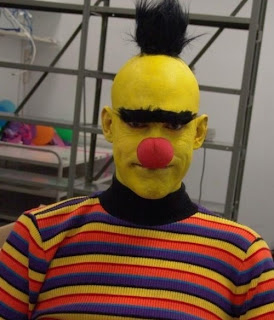 Occupation: Teaching kids how to clean up after themselves and being angry.

What I do for fun: I like to stand under the shower when you turn it off. As the water pressure lessens the remaining water dribbles out like your being pissed on by a giant or a horse. It makes me feel like I'm somebody.

About Me: Greetings, my name is Burt. I'm new to the dating scene and was looking for a caring lady that can keep up with my unique lifestyle. Most of my time is spent shaving my head to look like a felt tip marker. Despite my shaving regiment, I do have a monumental uni brow, I think it makes me mysterious. I'm very close to my roommate Ernie. We share a room with matching twin beds and I'm often annoyed at everything he does, yet I stick around. I stay out of pity, since I think he might be mentally disabled. I promise I will keep him in the closet when you come over. 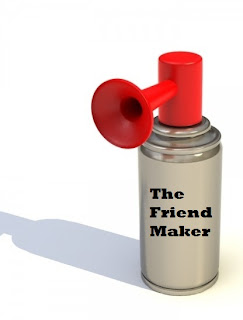 I love air horns. My little brother just upgraded the horn on his K-5 Blazer. It's almost 3 times  louder than the legal decibel limit allowed on our highways and byways. Needless to say, the middle finger of opposing motorist has diminished in its effectiveness when the retort is undeniable audible power. The deaf community is his only worthy adversary.

I buy an air horn at least once a month. Not once have I ever used it for its intended purpose. No where on the packaging does it illustrate how well it can scare your pets.


The air horn is also a fantastic way to end a conversation. It eliminates that moment of purgatory when both parties run out of things to say to one another. As you say the last word make the period be heard with a ferocious air horn blast and simply walk away.


One of the best uses of an air horn is to announce when it's time to go to bed. Wait till everyone's in their beds for about 15 minutes, then fire off a blast. Everyone under your roof will sleep soundly knowing it's officially time to go to sleep.


In many cases an air horn replaces a fart that just isn't there. We're only human, but the air horn isn't.

Why should we restrict ourselves to only having a horn while operating a vehicle? The technology is there for the taking and I say take advantage of it as much as possible. A portable horn let's everyone know what you're all about. It tells people "I'm here and I got this whole scene under control."

I once had a dream about an air horn. Would you like to hear it? (Mat blasts an air horn at his computer monitor.) That was a really deep joke wasn't it?

Anyways, in my dream I was at a Texas Ranger game. They're the professional baseball team that came in second in the World Series twice, back to back, perhaps you've heard of their dormant greatness. I know there greatness and in my dream I was in the stands holding a rally sign and brandishing an ungodly loud air horn. The whole scene was totally tits. My sign read in big letters, "I've Got an Air Horn!!!"

Is it too stupid to make this dream reality? Is too stupid to get on Sport Center or is it just stupid enough? Only time will tell. I already own an air horn, making the sign shouldn't take too much work. I might add some Lisa Frank stickers for flair. The next step is to wait until the first pitch of the upcoming season. Then no longer will I be a dreamer, but a doer.
No comments: