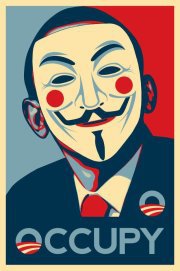 I'm not a Republican or Democrat. I feel aligning with anything limits personal freedom. With that said, the members of Occupy are unsuspecting pawns. The people taking part in the protest should be paid by the Democratic party, because they're working for free. Occupier's are victims of the basic war tactic, divide and conquer.

I went to college, graduated and began my career path. The most money I ever made in one year is $25,000. That was about 5 years ago. Now fast-forward to the present and I've been laid-off 5 times and I work on a dock for $9 an hour.

I hope I've established my street cred as a down trodden member of the "Shat-Upon." I feel the same emotions and depression. I desperately want to have a purpose and be paid handsomely for it. Everyday that greed turns on its owner is a victory. I understand the hatred. We are brothers in this hate.

But before joining this gathering, why didn't more people ask questions?

Such as, where does the money come from to fund such a movement? Donations are part of it , but how did it get off the ground. National presence just doesn't happen. It takes money, lots of it. Someone took a risk with their money. Someone who can afford to lose what they invested. 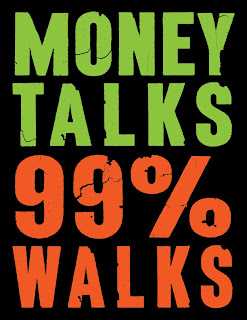 The rich stay rich for a reason, most of their decisions are prudent and decisive. All the while, never questioning the ethics and morality of the path to more power. That's the quality that the general public lacks when it comes to mixing politics with commerce.

The same people that caused the fall of Wall Street are the same people making this possible. Why doesn't anyone else see this? People complain about government bail-outs then want themselves to be an exception.

No one should be bailed out, financial death is a critical part of free enterprise. The fear of failure is the greatest motivator and failure is the only motivation for some. Why deprive a person ,or company, of this critical aspect of reality? Without failure and unbridled success we are a Socialist country trending towards Communism.

Millionaires and billionaires are employing the people that hate them the most. By dividing a society down undefinable lines, the diversion allows for legal money laundering to fund elections, special interests and personal agendas. 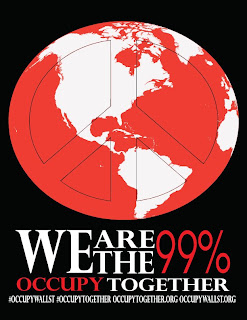 The money will move back and forth until the focus becomes secondary. The money will end up somewhere after the cause dies and the buzzards will patiently be in the trees waiting to feast.

The powerful have discovered how to control people without paying them. It's like a new religion without a God, afterlife or discipline of study.

Once the race for Presidential Office begins these people will be forgotten and discarded. They've served their purpose. The War Chests are full and the jobless, hopeless and broke have been exploited as if they had a job, but never got paid for it. It's not a crime when the victim is a volunteer.

The powerful know it is impossible to protest Capitalistic greed. In order to do so, you must exist outside the grid or you're a hypocrite. You can't be a pimp and a prostitute. You can't be a consumer then complain about the profit made on your purchase.

I asked an Occupy member a few questions about the cause. He seemed well informed and smart. I agreed with a lot of his reasoning. That is until he compared Occupy to the The March on Washington led by Martin Luther King in 1963.

There it is, a total lack of understanding about anything.

The March on Washington on August 28, 1963 had a plan with an end. The participants were fighting for the total and utter eradication of racial intolerance. They knew if they didn't take to the street it would be the job of future generations. Today we look back at this event as a turning point and advancement in our humanity.

Occupy is a misguided act of desperate self preservation or the peak of the rich exploiting the poor and ignorant. There's very little nobility or substance. 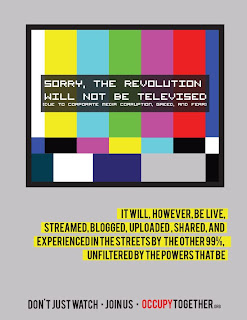 Their thirst for change gives me hope, but every attempt at progress must have a direction. One must also have some sort of leverage to induce the other side to be taken seriously. Hanging out pretending to be a vagrant isn't leverage.

Oh and just for the record, the government is killing our future, not millionaires.


Update:  A bunch of them got arrested in Dallas this weekend blocking an entrance to a Chase bank. All that was proven was their ignorance of the law. The rest fled back to the sanctuary of the park where they loaf around and tweet on their iPhones and macBooks.

Apple is a world super power and a corporate Juggernaut. Hypocrisy much? Speaking of the "H" word, the only people they seem to be punishing are the people that have to clean the city parks they trash and I doubt the guy that cleans the chemical toilet is a millionaire either.

From the street sweeper, to the suit that looks down on them from his corner office, everybody is making money off these radicals. Oh wait, a radical actually has a definable idea. They're so disillusioned I can't even come up with a name to diss them.

All this could be ended with my 4 step plan.

1: Toby Keith plays a concert at every Occupy Location
2: Freeze all Trust Funds
3: Then release the new iPhone 5. They'll all migrate to the Apple store
4: Make me President

If they succeed at anything I will be the first to eat crow. I just don't buy into it. They all need to talk to their grandparents and learn from a greater generation. I suck it up and work. I use my college degree as a beer coaster and go to work on a dock everyday. I used to write things for a living, now I'm an ant moving cheap crap imported from China. As every $9 hour ticks by I die a little, but my pride keeps me going. Adapt or die.