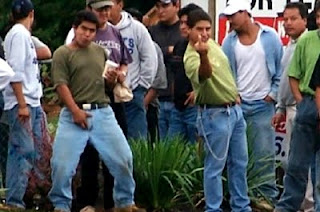 I watch a lot of Telemundo and Univision. Last night I saw a movie so bad that I sat and watched the whole damn thing from beginning to end. So here's a list of what makes a great/bad Mexican movie.

1. Somehow, some way, the lead character will ride a horse at some point.


2. There is a reoccurring, errant chicken in  background shots.

3. Actors on camera seem surprised when the movie ends.

4. The boom mic, it might as well be a character. I see its plentiful and sporadic appearances as a potential drinking game.

5. When a character uses the phone he uses his index finger to dial. Who the hell does that? The thumb is the only way to go. Just try doing it, you'll see what I mean.

6. And when the phone rings, the character that's supposed to answer is staring at it waiting, as if he's telepathic.

7. Somehow every gunfight occurs in a rock quarry.

8. Actors using firearms ,that apparently, have never shot a gun before. A little firearms training goes a long way. When the villain slays people with his Desert Eagle it would be nice if he didn't flinch like a little bitch.

9. Every stinking car is a piece of crap. Last night the hero of the movie drove a Corsica. The villain drove a Cavalier.

10. The random use of midgets and the need for dogs that have the ability to talk.

11. Random, unexpected and pointless nudity. This is a big plus.

12. The men are unproportionally ugly to the women in the movie that are as hot as Telemundo weather chicks.

13. At some point, a meeting between key characters will take place in a strip club.

14. There will be at least 10 images of the Virgin Mary. Look for it to appear in the background hanging on the wall or when the stripper goes to kill the priest that betrayed her.

15. Black people that speak Spanish. They add that in because it's totally odd to see a brother speaking Spanish.