Only Zombies Can Save Us 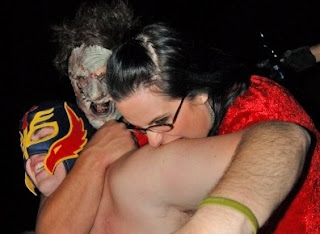 As I sit in traffic I notice what folks are doing around me. I see long faces and uninspired gazes. Every now and then, someone will come alive to spew venom at a fellow motorist. I fear the day I'm in the company of someone with more ammo than self restraint. Being trapped in a hopeless situation is the worst.

As I wait in line at the grocery store I observe the people around me. Most seem angry or indifferent about the time wasted waiting to purchase and consume. The folks's with kids are occupied with saying "no" to the child's demands for candy. While others sneak a free read from the fish-wrap that tells the secrets of  famous people.

As I merely exist, all I see are people attempting to cut their rope and escape. Yet no matter how hard they try, pride, addiction or love keeps them from seeking their independence.

Fear is a powerful motivator, but it can also be the noose around your neck. Either way, below our surface we're all hoping to hell there's just a little more than what we've already experienced.


There's a sort of hopelessness to it all. The monotony, the repetition and the uncertain destination can get to you. Most of us wake up, go through the motions of a job and fake it until we're off the clock. And we do this for the sake of our own self preservation. Some look no further than the next day, others are planning the next big purchase, while a few are motivated by the noble pursuit of the well-being of another.

The mindless actions of people scare me, the future and my own personal apathy ,about everything, is frightening. Some movie about a Pandemic that spawns flesh-eating drones from the bodies of deceased humans seems lame, but yet the world can't get enough of it these days.

The US and the world are in a financial tailspin. Not everyone has hit total rock bottom. They might think they have, but like pain tolerance it's all relative to what you've endured previously in your life. The man missing a leg might have the final word over the man with the paper cut.

The daily battles, plus a bleak fiscal future and the invented oppression we create to justify our lackluster existence, breeds depression. Trust me I lack a degree in psychology, but I've got a great deal of "on the job training." Not giving a damn is great in theory, but we refuse to become a zombie. Instead, we revel in their demise as we bathe in the digital bloodbath.

A zombie personifies the ills of society, our failures and everything we hate. As we look on, we couldn't be more in tune with the characters attempting to conquer the mindless, bloodthirsty and apathetic. We're more than the fly on the wall witnessing the plot unfold, we are that hopeless victim full of anger that's powered by an unyielding blind hope. All the while, the audience is seeking revenge for something they can't quite define.

This is more than escapism. It's group therapy by means of mob mentality. All the things that try to destroy us are suddenly well defined and can be killed without remorse. Sure, as the credits roll nothing has changed. You're still living paycheck to paycheck, our government is pitiful and the 80% of the population you can't stand is still alive, but hey, it could always be worse. In a way, it's beautiful.

The next zombie Apocalypse you witness allow yourself to be inspired.